TOURNAMENT WILL BE THE FIRST LIVE TELEVISED BASKETBALL SINCE MARCH 12

The Basketball Tournament (TBT) today announced Nationwide Arena in Columbus, Ohio will play host to all 23 games of this year’s event, which is in its seventh year. Twenty-four teams will compete under quarantine from July 4-14 for $1 million, winner-take-all. This year’s TBT will be the first live televised basketball played on U.S. soil since the abbreviated Big East Tournament on March 12.

The decision to play in Columbus comes after city and state approval of TBT’s health and safety plan. TBT 2019 champion Carmen’s Crew (Ohio State alumni) will get the opportunity to defend its title in its hometown.

“Being the first basketball event to play in the U.S. since March is a monumental task that is only possible with great partners,” said TBT founder and CEO Jon Mugar. “We can’t thank the State of Ohio, Columbus Sports Commission, The Ohio State University and Nationwide Arena enough for their support, not to mention our longstanding partners ESPN, Puma and Zelle®. Everyone is unified in wanting to see basketball on TV again, and our players can’t wait to compete.”

“Hosting TBT in Columbus is another step forward in our state’s efforts to responsibly restart Ohio. We’re looking forward to having live sports back in a safe way we all can enjoy,” said Ohio Governor Mike DeWine.

Andrew J. Ginther, Mayor of Columbus, Ohio, commented: “I couldn’t be happier to welcome TBT back to Columbus. Our city is committed to following all public health recommendations in order to create a safe environment for participants. Although this year’s event will certainly be different than years past, we look forward to showcasing Columbus and providing another excellent experience for TBT.”

This year’s TBT also marks the beginning of a three-year extension with ESPN that will run through the summer of 2022. TBT’s exposure on ESPN has grown each year since the event was founded in 2014. In 2019, a record 48 hours of TBT aired on ESPN television networks with a combined audience of more than five million viewers. More than 600,000 people watching Carmen’s Crew (Ohio State alumni) defeat the Golden Eagles (Marquette alumni) in the most-watched Elam Ending in TBT history. 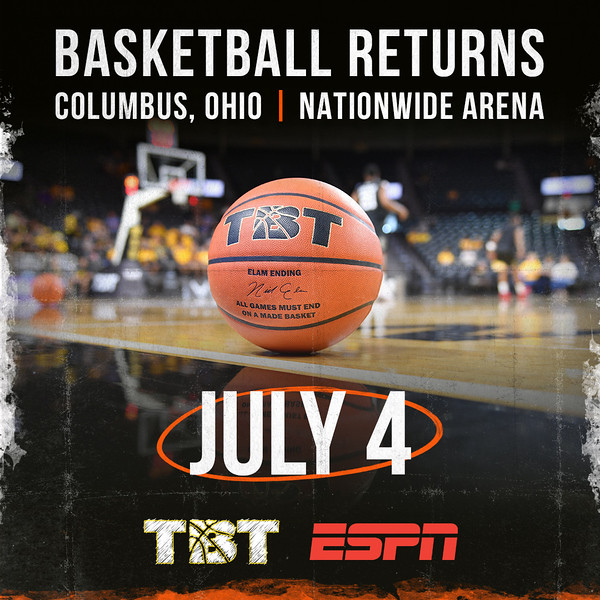 “TBT is one of the most unique and competitive events on our schedule with former college and NBA players playing everyday athletes for a big prize,” said Burke Magnus, ESPN Executive Vice President, Programming and Scheduling. “The excitement surrounding TBT continues to grow, particularly among younger viewers on ESPN, and we are proud to continue our association with TBT while offering even more exposure of this summer’s event with fans yearning for the return of live sports.”

TBT 2020 will be a fanless event, with teams and staff arriving five days prior to competition for multiple rounds of COVID-19 testing. Once underway, a single positive test by a team member would result in the removal of the entire team.

Once again this year, all games will feature the Elam Ending, the end-of-game format made famous during the 2020 NBA All-Star Game that eliminates the game clock after a certain point and features teams playing to a Target Score. The 24-team field will be announced June 16. Registered fans of the winning team will split $50,000.